March 31, 2018 Kshitija Agrawal Cyber Attacks, Data Breach
Under Armour on Thursday announced that over 150 million customers using MyFitnessPal, its nutrition tracking app, were hit by a data breach in late February, earlier this year.
According to Under Armour, they discovered the breach earlier this week and said that an “unauthorised party” had acquired this data. Once they were aware of the breach, they took steps to alert the users using in-app messages as well as email.
They are currently working with data security firms and coordinating with law enforcement authorities to get to the bottom of the breach.
"The investigation indicates that the affected information included usernames, email addresses, and hashed passwords—the majority with the hashing function called bcrypt used to secure passwords," the company said in a statement.
Under Armour said that the attackers would not have been able to access information such as users' Social Security numbers and driver's license numbers, or payment information, in the breach but usernames, email addresses, and password data were taken.
The company is now urging MyFitnessPal users to change their passwords immediately, along with reviewing any suspicious activity in their account. It has also warned its users to be cautious of any emails or unsolicited messages in light of the breach, and to not give away personal data.
The app lets people track their calorie intake, diet, and exercise routines, and was acquired by Under Armour in 2015 for $475 million.
Comments Off

Youth Loses Rs 88,516 In Yet Another Incident Of Credit Card Cheating.

March 31, 2018 Medha Bhagwat Credit Card hack, Digital Wallet transactions.
A youth from Thiruvananthapuram reported Credit-card extortion to the tune of Rs. 88,516 through his SBI credit card on Thursday.
Working in an automobile showroom, Hari Kumar, a local of Poojappura, proclaimed to have lost Rs. 88,516 through a solitary exchange. The exchange had occurred through PayPal, a "digital" wallet, around 11.45 a.m. 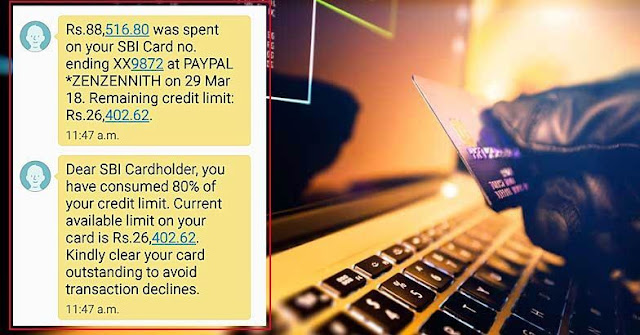 Not long after receiving a SMS alert, Kumar contacted the bank and simultaneously blocked the card. With the transaction being finished without the need of a "one-time-password" (OTP), authorities of the bank were dubious that it could have been conscripted from outside the nation.
Kumar later added that he came to know from the digital cell that no less than three comparative cases were still pending before the police.
The Dissensions however, have been submitted to the District Police Chief of the Thiruvananthapuram city as well as the Cyber Cell.
Comments Off

March 30, 2018 Prasanta Baruah Uncategorized
In a damage repairing exercise, Facebook claimed to have made some drastic changes in the privacy pages apart from launching a new short cut menu making it more user friendlier than before.

The largest social networking site on the planet has now come up with only a single screen doing away with the existing 20 ones much to the convenience of the users who started losing confidence over the privacy mechanism following the recent revelations in question.

The existing privacy settings, which many experts have questioned, have also been removed where the users would find it much friendlier to go to one place only. Facebook further has announced a new privacy shortcut menu teeming with common functions to ensure safety, security and sanctity of privacy amid an escalating word wide controversy.

Facebook authorities further say very soon they would propose updates to the terms of service to prove beyond doubt their commitments to the users who they said would repose faith on the new mechanism.

Without any hesitation, Facebook CEO Zuckerberg shared privacy concerns admitting that Cambridge Analytica used data without any consent from the competent authority.

In a recent statement, he said he needs to understand the ground situation and the circumstances to ensure that these do not repeat in future since protecting data was their responsibility.

According to Erin Egan who holds the charge of Chief Privacy Officer, some users want to delete things they’ve shared in the past, while others are just curious about the information Facebook has.

The Facebook authorities have hoped that these slew of measures would help the social networking site regain confidence of the users at a time when Mozilla has suspended the Facebook advertisement pieces and a leading investment unit is believed to have been preparing to offload its stake from the Facebook stocks.
Comments Off

Cryptocurrencies Observe A Dramatic Drop; Bitcoin Slumps below the $8,000 Mark

March 29, 2018 Medha Bhagwat bitcoin exchange, cryptocurrency, Market Capitalisation.
Over the most recent 3 days, the most profitable digital currency in the market has shed over USD 600 in its unit cost. In the value of cryptocurrencies, bitcoin drooped underneath USD 8,000 on Monday.
There was around a 7% decrease from the price 72 hours back and after the decline, the bitcoin was trading at USD 7,910 as indicated by CoinMarketCap. This is the first time in the week when it went beneath that protection level.
Be that as it may, it has been realized that the bitcoin's cost has been playing with USD 8,000 level over the most recent seven days. Even the other cryptocurrencies saw the same sensational drop. Ethereum dropped more than 11 per cent and Ripple drooped by more than 10 per cent in most recent couple of days and the digital currencies were trading at USD 464 and USD 0.57 at the time of announcing.
While the current dive brings bitcoin withdraw by critical sums, its cost is still high contrasted with all the more long haul execution. The current drop evacuates every one of the gains made in December – yet it is still up 2520 per cent in the course of the most recent year, with the recent drop essentially fixing the whole inconceivably quick surge the traders saw toward the end of the last year.
In general, the worldwide cryptocurrency market lost over USD 30 billion in its market top in the previous 72 hours and presently, the market capitalisation of the worldwide digital currency advertise is affixed at USD 298 billion.
Comments Off

March 28, 2018 Prasanta Baruah Uncategorized
A soaring cyber crime graph threatens to paralyze the rapid growth in the country’s banking and financial sectors these days. Unless and until an effective mechanism is devised to keep this growing threat at bay, the much hyped growth of digital services has hardly any chance to percolate any benefit to the country’s economy. Cybercriminals are still at work to siphon off crores of money from many accounts with sophisticated digital applications, making online payment system more vulnerable in mobile wallets, forcing the stakeholders to go for a set of tight mechanisms to rein in the threat. A joint survey by Data Security Council of India (DSCI) and PayPal spokes volumes of a slew of measures to firmly deal with this threat to restore the confidence of the investors and customers which include some policy strictures and tight regulations for online payment. The experts in the panel have suggested a tight framework of cyber security management in the companies with an efficient IT set up. The study report strongly feels the need a set of government policies to ensure safety of the public interest, privacy and information transpired with the service providers. Many government agencies and cyber security experts have welcomed the suggestions to avoid the impending cyber threats and the pubic disaster thereof. CERT-In, a reputed government agency has heaped huge praise on the report saying that the recommendations would help the country restore the confidence of the millions of people who have been directly or indirectly bearing the brunt of this escalating cyber threat. Same sentiment echoes in the national cyber security coordinators who are happy with the panel’s stress on infrastructure to ensure a safe and secured digital payments across the country. They, further pined hopes on the prompt initiatives by Visa and Mastercard to make it more convenient.
Comments Off
« Older Entries