Hackers of an Anonymous-affiliated group called Team Defiant are threatening the government of Namibia after it allowed the US-based Dallas Safari Club to auction the chance to kill a black rhino from the country’s Mangetti National Park.

The organization says the money raised through the auction will go to a fund for the conservation of the endangered species.

However, as many others, the hacktivists are not convinced. That’s why they’ve launched a campaign called OpFunKill.

In a video statement they’ve published, the hackers threaten the Namibian government. However, so far, they’ve defaced the website of American Made Outdoors, a major supplier of hunting, fishing, camping and marine gear.

They’ve also defaced the website of Just Holidays, a Namibian travel company. At the time of writing, both sites are still defaced. Check out the picture below to see the hacked sites. 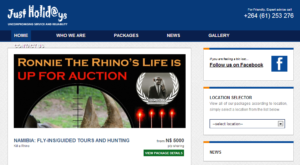