Google Appeals Watchdog That Declared It Guilty of “Search Bias”

April 12, 2018 Kshitija Agrawal Uncategorized
Google has allegedly filed an appeal at the National Company Law Appellate Tribunal (NCLAT) against the Competition Commission of India’s (CCI) judgement that ruled the search giant guilty of “search bias.”
Two sources who were aware of this matter informed Reuters, and according to one of them, the appeal was filed on Monday.
The CCI had in February imposed a $20.95 million fine on Google for taking advantage of its dominance in the online search and advertising markets, stating in its 190-page judgement that, "Google was found to be indulging in practices of search bias and by doing so, it causes harm to its competitors as well as to users."
A CCI official called their judgement “robust” and said that the competition watchdog will be defending its verdict at NCLAT.
The commission had discovered that using search results from its database, Google had placed its commercial flight search function at a prominent position on the resulting search page.
The CCI ruling has brought to an end a probe started in 2012 due to complaints by matchmaking website Bharat Matrimony and Consumer Unity and Trust Society (CUTS).
This judgement is the latest anti-trust setback to the search engine company. In a similar case last year, the European Commission had imposed a €2.4 billion fine on Google for being biased towards its own shopping service and demoting its rivals.
Comments Off google, search engine

11 top Search Engines other than google

Even so, others are still trying, offering different features or even trying to rethink the principles of the underlying technology.

These are some of the alternative search tools. 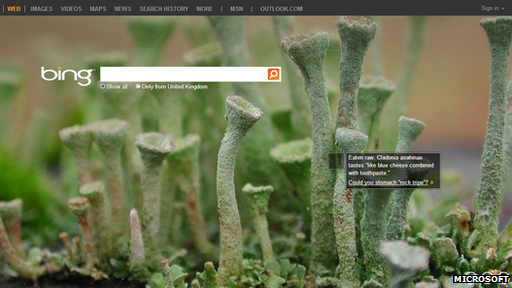 Microsoft’s Bing service is the leading search rival to Google when looking at the world as a whole – although it has less than a 20th of the traffic, according to StatCounter.

The most obvious difference between the two is Bing’s use of colourful photographs as background images on its homepage with hotspots revealing related links.

Microsoft has also been experimenting with social features.

US-based Bing users see a sidebar in their results that suggests Facebook friends who might be able to provide more information about a particular search, and they can also see “boards” – images and links hand-picked by a group of bloggers and other experts. 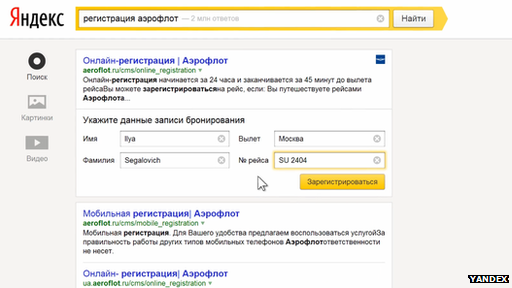 The firm is currently rolling out a revamped look to its results, introducing a new feature called “islands” – blocks of information that can be interacted with on the page, avoiding the need to click through to third-party sites.

For example a search for “Aeroflot check-in Moscow” brings up a block allowing the user to send their details to the airline, while “optometrist city clinic 57″ allows the person to book an appointment with an eye doctor from within the results page. 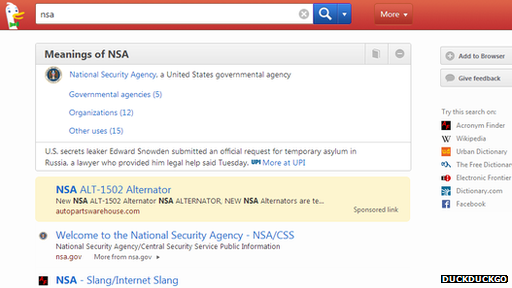 DuckDuckGo highlights privacy as its key feature, promising not to collect or share personal information about its users – a topical concern after revelations that Google, Microsoft and others had handed over data to the US’s National Security Agency.

Its traffic spiked after details of the Prism surveillance programme were leaked – although some later questioned whether it could truly prevent “NSA snooping” if the agency was determined to gather information.

DuckDuckGo also claims to be less cluttered than rivals – in part because it limits itself to one advert on each results page – and does not personalise results, saying this prevents users from becoming enclosed in “filter bubbles”. 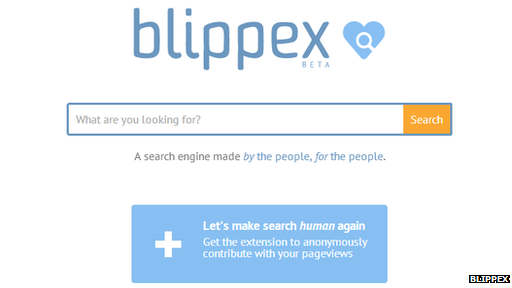 Most search engines base their ranking of results on their analysis of the words and links on a page.

Blippex instead orders sites according to their DwellRank – the amount of time people spend on a page once they have clicked onto it. The more seconds they linger, the more important the site is judged to be.

The service gets this information by asking volunteers to install an extension that sends it information about their activity anonymously.

Blippex launched earlier this month and early visitors might find some of its results unusual, but the developers promise that the more people use it, the better it should become. 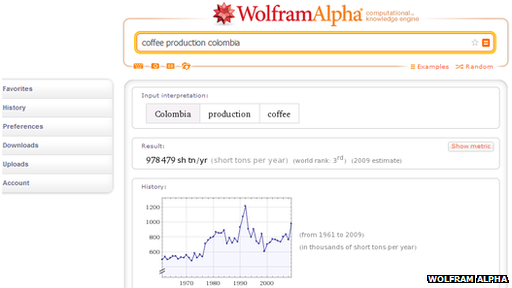 Wolfram Alpha describes itself as a “computational knowledge engine” and strictly speaking doesn’t see itself as a “search” service, even if many people use it to hunt for third-party information.

Rather than deliver links to other sites, it gathers facts and figures from primary sources and then allows the information to be structured and compared with other data sets, presenting the results in a range of tables, graphs and other illustrations.

Wolfram also charges for a “pro” option, which also allows users to enter images and their own statistics for analysis, and promises a richer set of results. 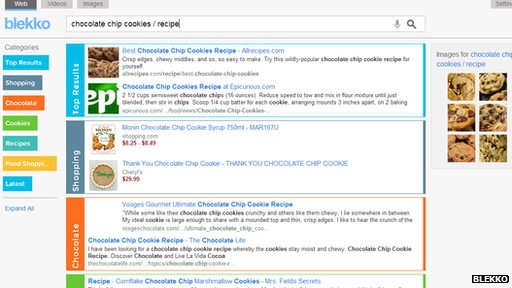 Blekko’s unique selling point is its use of “slashtags” – a tool to filter the results the user wants to receive.

Results are then grouped into different categories – such as shopping, recipes and cake decoration – to help users focus on the kind of results they want. 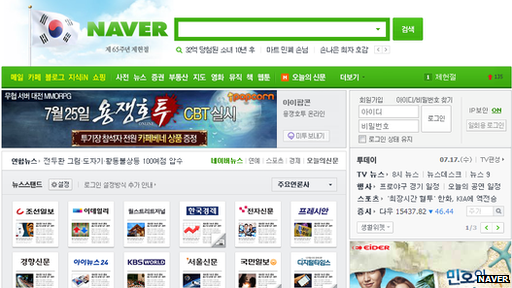 South Korea’s leading search engine dates back to 1999, when it was created by a group of former Samsung employees.

Queries deliver unusually long lists of links grouped according to where they were sourced from – blogs, social networks, advertisers, apps, books and news services.

Links often direct users to material sourced from Naver’s own services including its “cafes” – areas where people sharing similar interests post content about a particular theme. 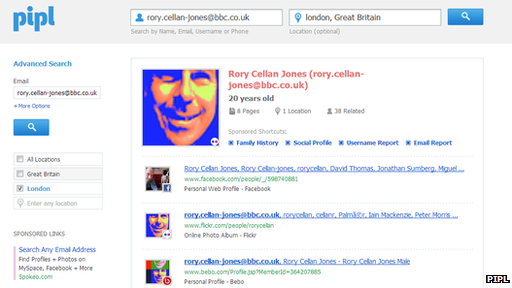 Pipl specialises at unearthing details about a specific person or material they have posted to the net. It allows queries to be based on a name, email address, username or telephone number.

The developers say their product turns up results their rivals miss because Pipl “crawls the deep web” – including data on social network profiles, court records, member directories and other databases.

Results include photos and sometimes the names of other people the subject knows.

It might sound like a stalker’s dream, but visitors can also use the service as a way of tracking down profiles and posts they had created and then forgotten about. 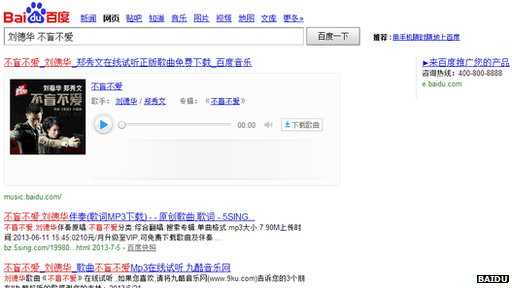 The firm says its strength is that it does not only provide links but, in many cases, the actual information the user wants. This can include songs and videos embedded into the results and even interactive web apps.

For now the service requires its users to be proficient in Chinese. However it recently launched an English-language website for overseas developers wanting to use its services to sell apps to the mainland. 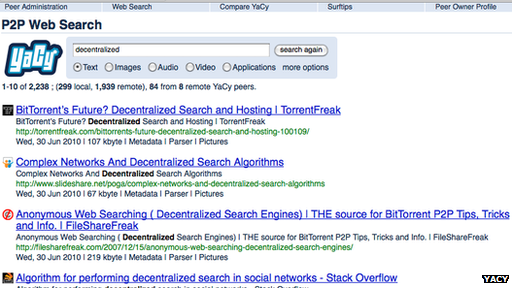 Yacy bases its search engine on the principle of a peer-to-peer network.

Instead of using its own servers to index the web, it relies on its users’ computers to do the work via software it provides. The information gathered is then shared to a common database, fragments of which are distributed across the network.

Because the answer to any query is obtained from other volunteers’ computers rather than a central portal, Yacy says it is impossible for anyone to censor its results.

However, the ranking algorithms it uses are not as advanced as many of its more traditional rivals, which may limit its appeal beyond an enthusiast audience. 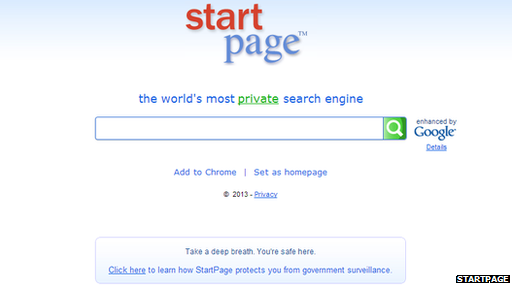 StartPage describes its service as being “enhanced by Google” – a cheeky reference to the fact it depends on the larger firm for all its results.

Its selling point is that it strips all identifying information about users before submitting their queries, preventing Google from logging their internet addresses or installing cookies on their device.

The company behind the product, Surfboard Holding, is based in the Netherlands. It says that places it beyond the reach of Prism and other US data collection programmes.

While all this may appeal to privacy-conscious web users, the trade-off is that results can’t be personalised to take account of their history or location – although StartPage suggests this makes them more “pure”.